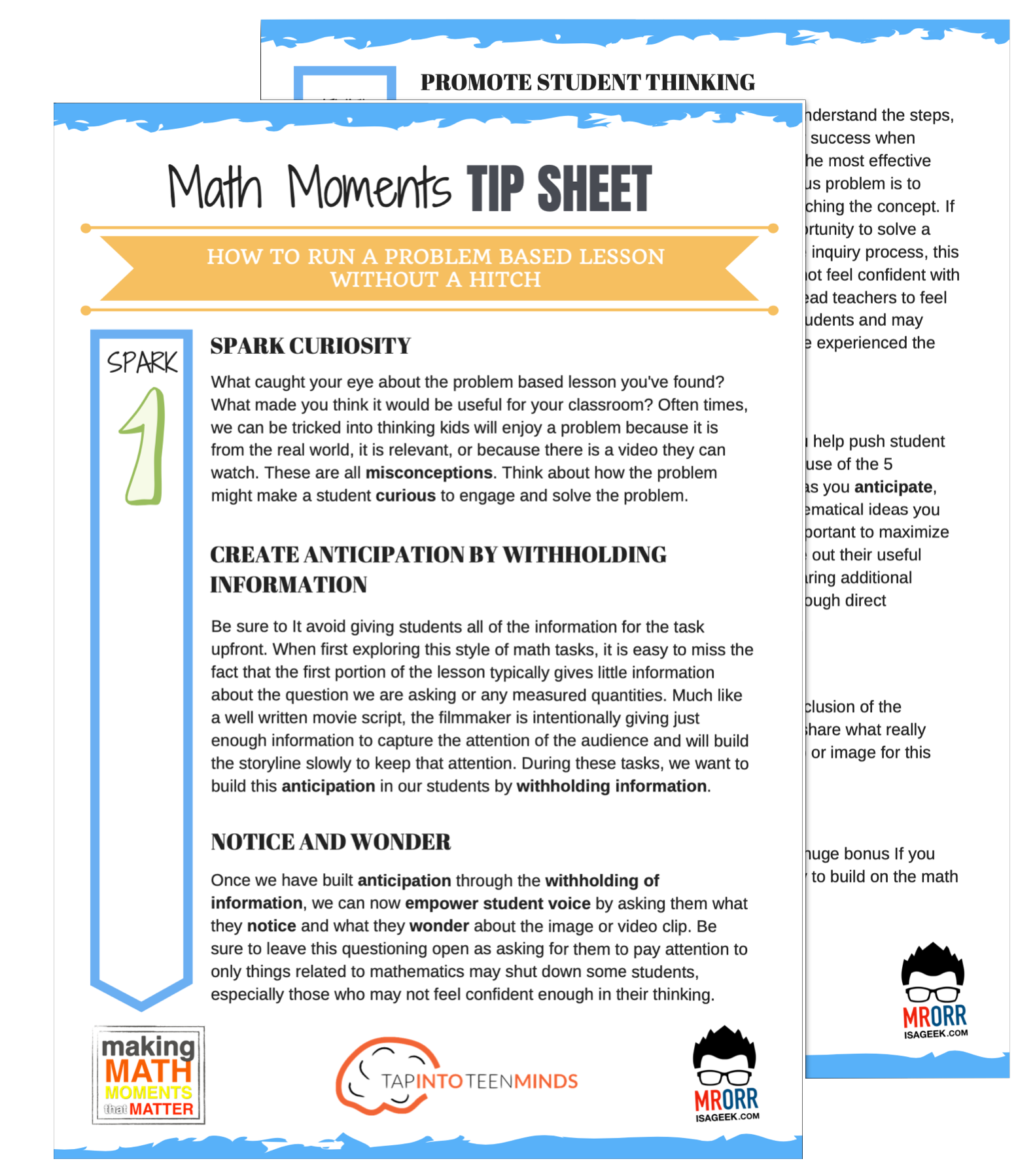 Be sure to read the teacher guide prior to running the task. When you’re ready to run the task, use the tabs at the top of the page to navigate through the lesson. 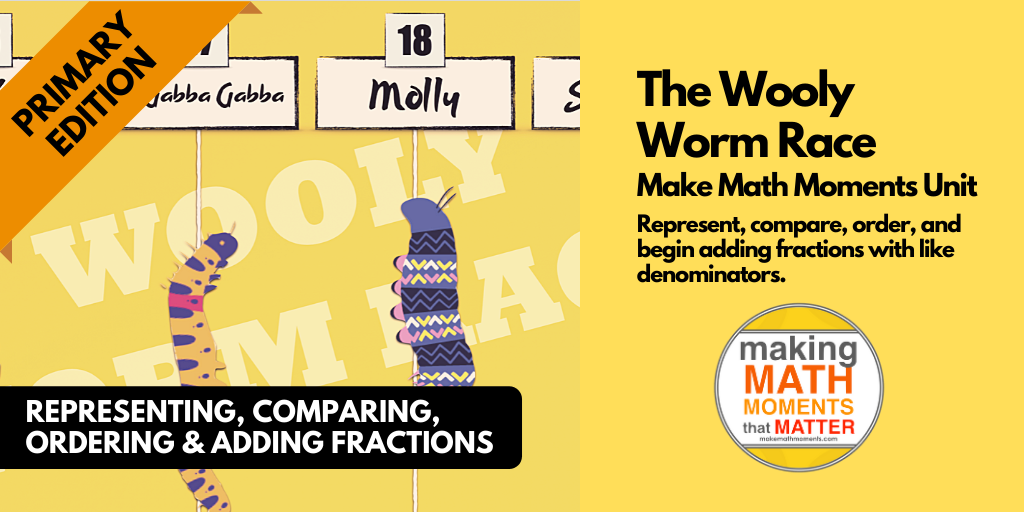 To crown a champion for the Wooly Worm Race, students will represent and order the distances travelled by each caterpillar.

In this task, students will represent the distances travelled by each caterpillar using a concrete or visual model to order them from greatest to least. We have intentionally selected a linear context because we are hoping to emerge the bar model and eventually the number line as effective and efficient representations that can be used when working with fractions.

Some of the big ideas that may emerge through this task include:

Show students the first minute of this video:

In the actual “Wooly Worm Race”, the first caterpillar to the finish line wins. However, in this particular unit, we will be modifying the rules to better suit our learning goal. Be sure to stop the video after the first minute to avoid introducing information that will conflict with the context of this unit.

What do you notice?

What do you wonder?

Give students 60 seconds (or more) to do a rapid write on a piece of paper.

Then, ask students to share with their neighbours for another 60 seconds.

Finally, allow students to share with the entire group. Be sure to write down these noticings and wonderings on the blackboard/whiteboard, chart paper, or some other means to ensure students know that their voice is acknowledged and appreciated.

Some of the noticing and wondering that may come up includes:

At this point, you can answer any wonders that you can cross off the list right away. For example, share that this is in fact a competition. The competition is called “The Wooly Worm Race” and it is held annually in Banner Elk, NC. The winner is awarded to the caterpillar who climbs to the highest point on their string within the allotted time.

Then, share the following video and explain to students that this is a video showing the distance the winning caterpillar climbed:

A screenshot of the final frame of the video is shown below. 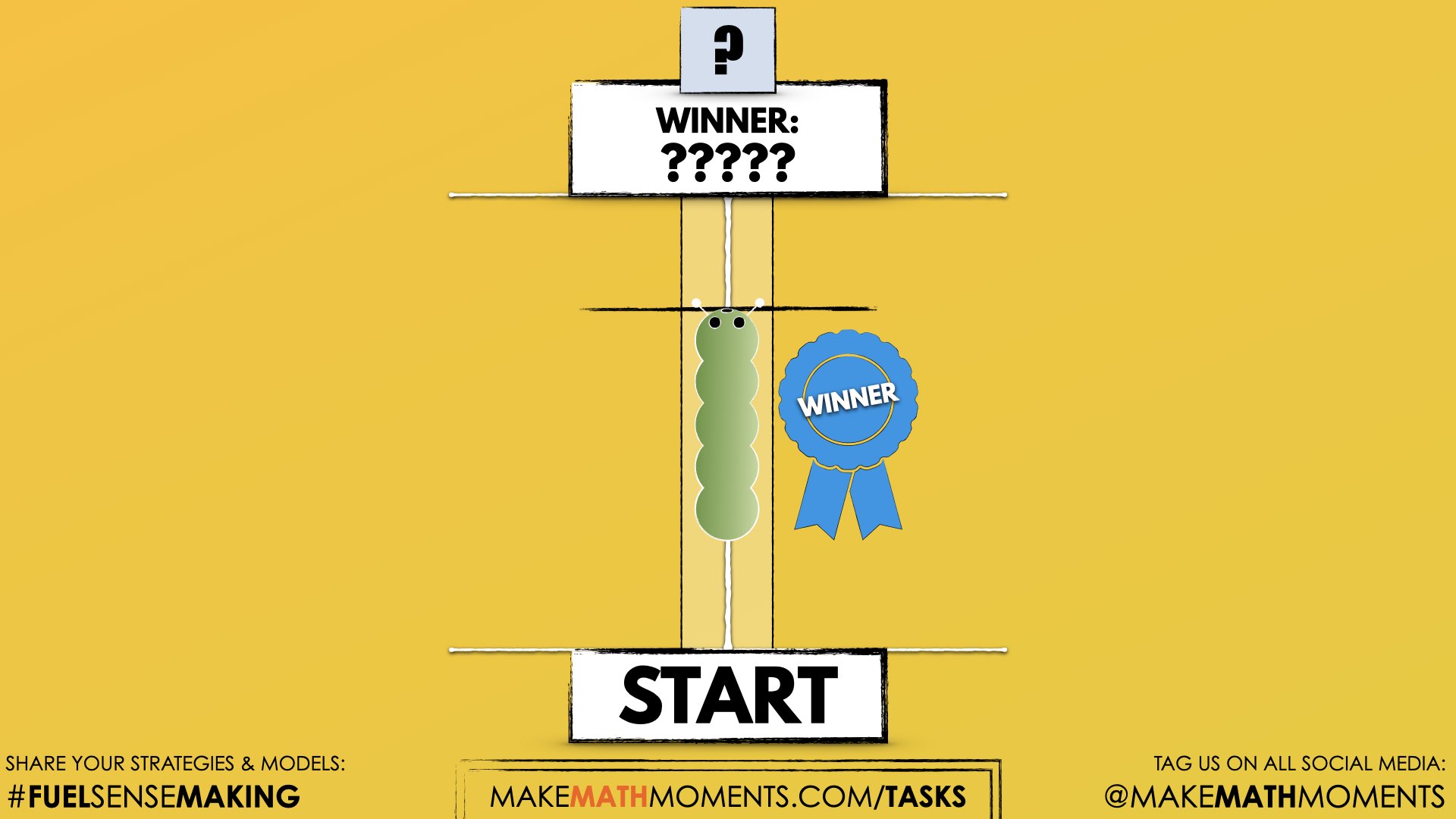 After we have heard students and demonstrated that we value their voice, we can land on the first question we will challenge them with:

How far do you think the winning caterpillar climbed?

We can now ask students to make an estimate (not a guess) as we want them to be as strategic as they can possibly be. This will force them to use spatial reasoning alone to try and come up with an initial estimate and to share it with their neighbours by trying to articulate why they believe their prediction is reasonable. 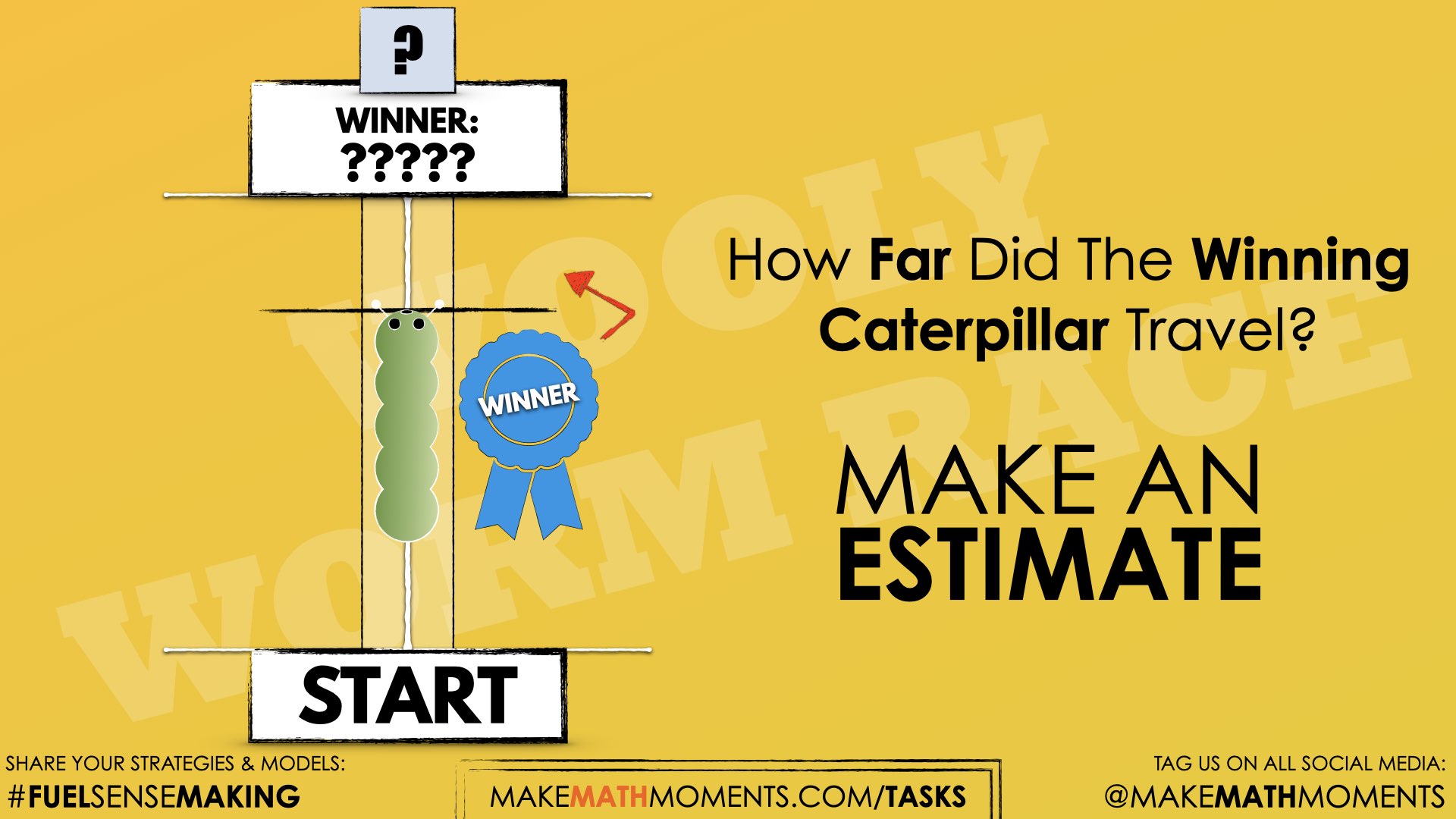 Note that we have intentionally left out the length of the race track in order to encourage students to use fractional thinking rather than measuring in standard units. It is clear that the winning caterpillar travelled less than the total distance of the track when the race time “ran out”.

While any and all estimates should be acknowledged and welcomed, it might be helpful to encourage fractional language. For example, if a student gives a decimal quantity for an estimate stating something like “point 8 of the way”, encourage them to articulate what “point 8” means (i.e.: 8 tenths). For young students, they may already have some understanding of the magnitude of decimal numbers based on their exposure to decimals in the world around them. Plan for how you intend to meet students where they are to help them develop a better conceptual understanding of where decimal numbers come from and what they look like concretely or visually (partitioning a whole into tenths, for example).

Let them chat with their neighbours and challenge them to an estimation duel or a math fight.

While Students Are Estimating…

Monitor student thinking by circulating around the room and listening to the mathematical discourse.

Encourage students to use precise mathematical language (including both standard and not standard units of measure) and positional language (in front, behind, on top…) to articulate their defense.

If students’ estimates are unreasonable, encourage them to select a manipulative similar to what they believe the length of the string to be (perhaps linking cubes or a meter stick).

While we hope to engage in learning around fractions including partitioning a whole to represent fractional amounts for the purpose of comparing, we will welcome students who share their estimates in decimal form and will not impose the use of fractions on them. Because the calculator is introduced to students so early in their mathematical journey, many students default to expressing fractional amounts as decimals without necessarily having a deep conceptual understanding of how they work. Later in this lesson and in this unit, we hope to continue building the conceptual underpinnings necessary for becoming flexible with fractions and we encourage you to attempt making connections to decimals and percentages if students bring them up when estimating or sharing their thinking. If students do estimate using decimals, be sure to help students by using appropriate language utilizing place value and the fractional language associated.

For example, when a student intends to share 0.8, they may verbally describe this quantity as “point-eight of the whole”, we can use this opportunity to improve the conceptual understandings of all students by accepting that response, but reiterating as “eight-tenths of the whole”.

Being intentional about the language we use when verbally describing fractional quantities in decimal notation can go a long way to helping make converting between fractions and decimals as well as place value so much more intuitive when students encounter them later in their mathematical journey.

After students have had an opportunity to share their best guess, tell them that you will now be sharing the distances travelled by the top 3 finishers from the championship race.

Since you have already taken some time to set the context for this problem and student curiosity is already sparked, we have them in a perfect spot to help push their thinking further and fuel sense making.

Share the total distance travelled by the top 3 finishers from the championship race:

Notice that the unit fraction is expressed in words rather than standard-notation. We will work towards standard-notation throughout this unit, but for the time being, we want to emphasize the fractional unit. You will also notice that we are only working with a limited number of denominators, and they have been strategically selected.

Represent the distance travelled by each caterpillar and use your representations to order the distances from greatest to least. 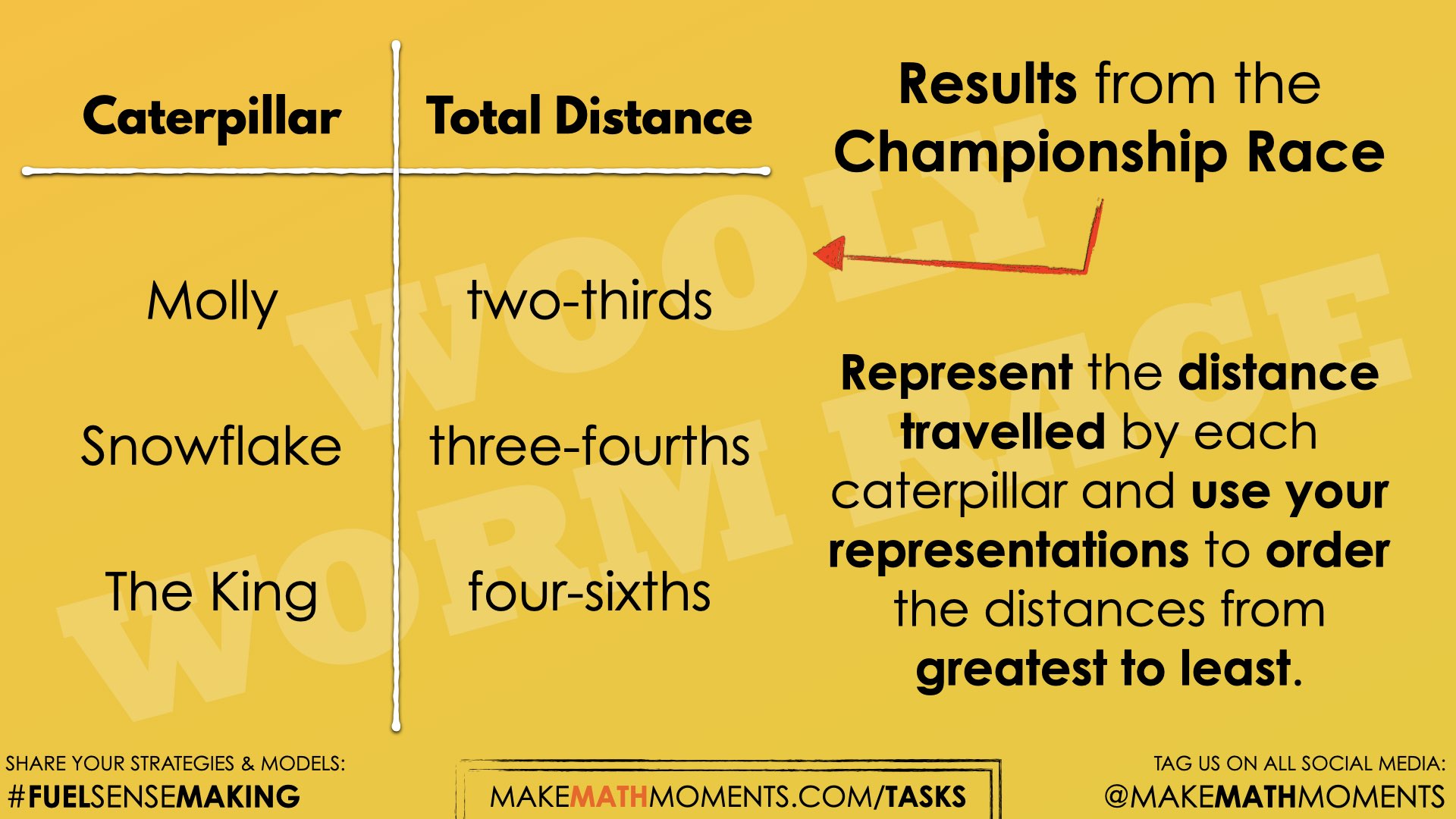 While Students Are Productively Struggling….

A still frame of the winning caterpillar is as follows:

Go back to student estimates from the Spark portion of the lesson to determine who had the closest estimate. Be sure to celebrate the student or students who were closest so that students realize that there was value in sharing with the group.

Did students use decimal notation and/or decimal language and/or percentages to share estimates at the beginning of the lesson? Consider extending from here to give students an opportunity to explore and make connections with comparing and converting between benchmark fractions, decimals and percentages.

Provide students an opportunity to reflect on their learning by offering this consolidation prompt to be completed independently.

Show the following clip and verbally explain what is happening in the video to set them up for your consolidation prompt.

We suggest collecting this reflection as an additional opportunity to engage in the formative assessment process to inform next steps for individual students as well as how the whole class will proceed.

Become a member to access purposeful practice to display via your projector/TV, download the PDF to upload to your LMS and/or print for students to have a physical copy 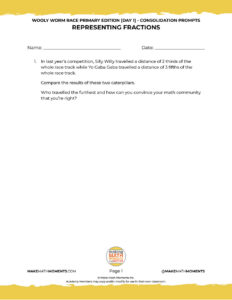 Download a printable lesson plan, video/images, and presentation slides in Keynote and PowerPoint format to make the experience as smooth as possible by becoming a member of the Make Math Moments Academy. 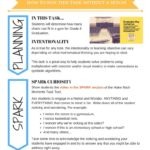 Download the lesson plan in PDF format so you can keep it handy and share with colleagues. 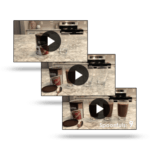 Download the videos, images, and related media files to your computer to avoid streaming. 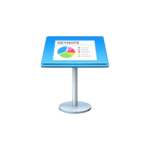 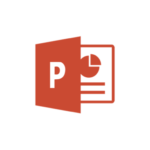 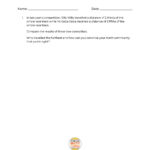 Download/edit the handout so you can keep it handy and share with colleagues.

Explore The Entire Unit of Study

This Make Math Moments Task was designed to spark curiosity for a multi-day unit of study with built in purposeful practice, and extensions to elicit and emerge mathematical models and strategies.

Click the links at the top of this task to head to the other related lessons created for this unit of study.

How far do you think the winning caterpillar climbed?

The total distance travelled by the top 3 finishers in the championship race are given below:

Represent the distance travelled by each caterpillar and use your representations to order the distances from greatest to least.

Become a member to access purposeful practice to display via your projector/TV, download the PDF to upload to your LMS and/or print for students to have a physical copy 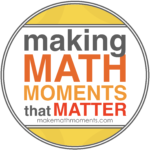 TAKE A TOUR OF OUR FULL TASKS & UNITS